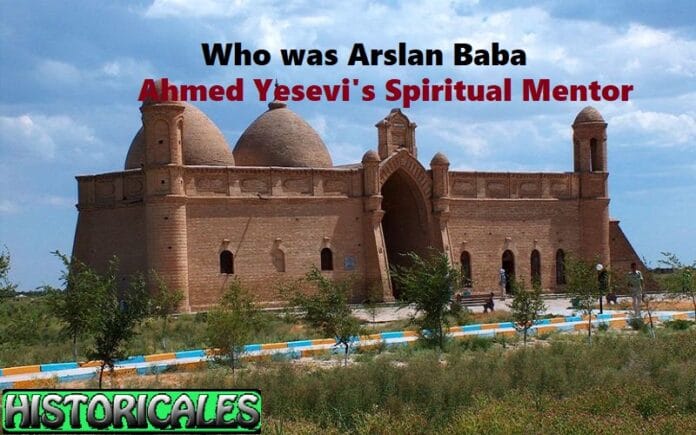 Arslan Baba was a Sufi religious mystic. He was treated like a saint. Ahmed Yesevi was the first student of Arslan Baba at the age of 11 years. The literature available nowadays doesn’t have any information or source of information that can be reached to confirm his birth and death dates. But it is rumored that his grave was dug in the 12th century. Literature also rumors that He was born in Turkey and was from Tashkent. He was also known as Mezar-ı Şerif of the time. He was also the student of the famous Imam Riza.

Arslan baba was looking for a student to transfer his knowledge. As per available literature, some writers say he was 400 years old and some say that He lived for 700 years. He started his search to look for Ahmed Yesevi. After living in Turkistan for several years, he found Ahmed Yesevi’s. He adopted Ahmed Yesevi after the death of his father and was Ahmed Yesevi’s spiritual teacher.

Apart from these, it is known that Mansur Ata, a friend and student of Ahmed Yesevi, is the son of Arslanbab. Mansur Ata took lessons from his father Arslanbab at a young age and grew up with the education he gave. Mansur Ata later became one of Ahmed Yesevi’s first students and spent most of his life with him.

Arslan baba’s tomb was made by Emir Timur, who was infect working on building the tomb of Ahmed Yesevi, but all tries were in vain. Then a revelation occurred in Emir Timur’s dream to build the tomb over the grave of Arslan baba first. The first mausoleum was built in the 14th century and up to the 18th Century, His mausoleum was built several times as earthquakes gave massive damage to the mausoleum time and again. In the 18th Century, His mausoleum was rebuilt with a double-domed structure which was supported by a carved wooden structure earlier used to build the mausoleum.